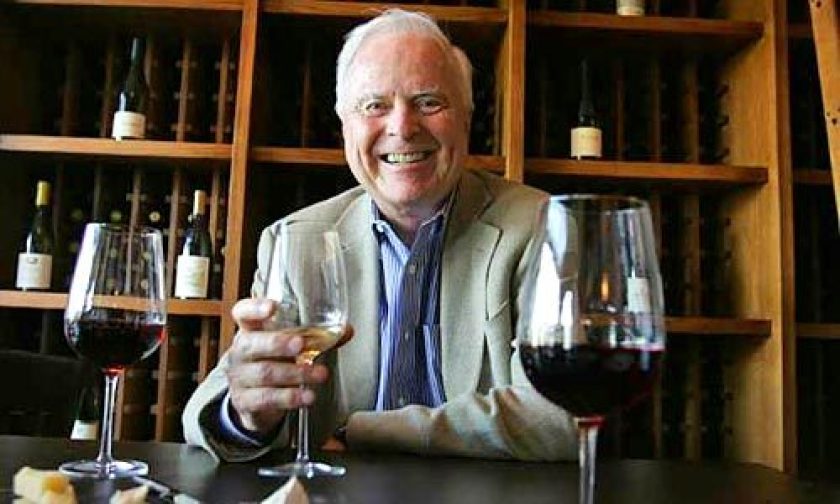 RICHARD Riordan is no gourmet. That’s one of the first things he wants you to know. But he is a restaurateur, and a very successful one.

In fact, though the 78-year-old Riordan is best known as the multimillionaire former mayor of Los Angeles, he also owns two of the busiest restaurants in Southern California, the Original Pantry and Gladstone’s Malibu.

And in the last year he’s opened three more, Riordan’s Tavern, next door to the Original Pantry in downtown Los Angeles, and the Oak Room and its adjoining Village Pantry in the Pacific Palisades.

None of those restaurants is what you might expect, though. Usually, when a really rich guy opens a new place, it’s loaded with swank — a symbol of his success where he can wow his friends and business associates.

Instead, Riordan’s restaurant empire is built around a beloved, if somewhat scruffy, downtown landmark and a seaside cash machine, neither of which comes within a couple of miles of gourmet while doing spectacular business.

Indeed, the Original Pantry is probably Riordan’s dream restaurant — an 84-year-old diner where nothing costs more than $20 and where a waiter once kicked him out for not eating fast enough. He liked it so much he bought it.

“When I fell in love with the Pantry, I was at breakfast, drinking coffee and I had a book I was reading,” he says. “I was very relaxed and the waiter came over and said, ‘If you want to read, the library’s at 5th and Hope.’ I fell in love with it right then.”

“The bottom line is: I’m an entrepreneur, a venture capitalist,” Riordan says. “I’ve been investing in companies since 1962 or so, and I’ve invested a lot of capital, and I’ve done very, very well.

“When it comes to restaurants, I would say I can’t paint a painting, but I can tell when it’s good. I can walk the restaurant, and I can feel when things aren’t going right. I may not be able to design it from the first, but when it’s done, I know what’s not working and what is working, and I know it when I see customers are not happy.”

What seems to attract Riordan to a restaurant more than anything else — besides a chance to make money — is a sense of connection to a community. The Original Pantry and Gladstone’s have longtime devoted customers, and his most recent acquisitions were originally Mort’s Deli, a Palisades institution for more than 30 years.

In fact, he’s played with the idea of putting together a group of landmark Los Angeles restaurants for a special co-operative marketing push. Besides the Pantry, he’d include Philippe, Musso and Frank, the Apple Pan, Pacific Dining Car and maybe Nate’n Al, “but their food is terrible. I guess I’d probably pick Langer’s before Nate’n Al’s.”

At dinner with him at his newest restaurant, the Oak Room, a clubby bar and grill, Riordan comes across as a restaurateur version of an inveterate tinkerer — one of those guys who can’t stop himself from taking things apart and trying to improve them. Except rather than mess with machinery, his métier is businesses.

NO DETAIL is too small. At one point, he calls over Oak Room chef Douglas Silberberg — a talented cook who is a veteran of both Michael’s in Santa Monica and Water Grill downtown — and suggests cutting costs by trimming the bacon from some of the sandwiches.

Silberberg ponders the suggestion, then points out that there are only three sandwiches with bacon — a BLT, a pork sandwich and a hamburger.

“Well, I’m not sure you need the bacon with the hamburger,” Riordan says. “What do you think?”

“I do think [we need it],” Silberberg counters. “We get more compliments on our hamburger than almost anything else.”

“Oh, OK, then,” Riordan says, returning to his conversation.

And, in fact, a few minutes later he digs into his entrée — it’s “The Mayor’s Burger” and there’s bacon, along with caramelized onions, blue cheese and wild arugula.

“This is a really good burger,” Riordan says. “Of course, maybe that’s because I didn’t order it well-done like I usually do.”

Riordan has been in the public eye for so long, it’s sometimes hard to separate the substance from the shtick. When he called Silberberg over, was he doing it because he really thinks he could save some money by cutting bacon, or was it to provide an anecdote for this article?

He is certainly a born entertainer. Periodically, he’ll interrupt a conversation in midstream to tell a joke — it’s usually of the “stop me if you’ve heard this one” variety and it’s usually mildly politically incorrect.

However, Riordan is all business when it comes to restaurants. “I’m not a connoisseur. I can’t tell you what the best things in a restaurant are,” he says. “To me, a great restaurant is a busy restaurant.

“That’s what my dad taught me. He was in the retail business, and when we were on vacation, he’d go to every store in the area, and he could tell you within 20 seconds of walking in whether they were making money or not. You can just sense the electricity.”

Riordan’s restaurants so far have accomplished that. He bought the Pantry in 1981 as part of a larger real estate deal and then couldn’t bear to part with it. It now grosses about $5 million a year and has been so busy for so long you can see something like seven layers of linoleum where it’s worn through in front of the cash register.

And Restaurants and Institutions magazine recently ranked Gladstone’s Malibu, of which Riordan is the largest shareholder, as the highest-grossing restaurant in Southern California, estimating an annual take of about $14.4 million. (There is a second, separately owned, Gladstone’s in Long Beach.)

Riordan is not afraid to take the credit for the turnaround. When he bought Gladstone’s in the mid-’90s along with other shareholders, including fellow millionaire power-brokers Eli Broad and John Cushman, the restaurant was “desperate financially,” he says.

“So what do you do — close the restaurant, or what? I had meetings with them and being a competent fixer of bad financial situations, I came up with some ideas how we could handle it. It turned out extremely well . . . more than extremely well.”

‘A penny here’ and there

THE FIRST thing he did was financial, renegotiating leases and bank loans. “I was able to take about $600,000 a year off their overhead in the first month,” he says. Then with the help of his restaurant right hand, Jean Hagan, he pared the menu by two-thirds. “They had a long menu, and there were things on there that people barely ordered.”

The rest of it, he says, was “a penny here and a penny there — keeping costs down a percent or 2. In the restaurant world, it’s the cream on top where you make all the money. You make half of your profit in that last 5%.”

So far, Riordan’s three new spots are works in progress. The Oak Room and the Village Pantry, which he bought in 2007, are on a side street in the Pacific Palisades. The first, which opened last month, is a California cuisine-style restaurant for grown-ups. The Pantry, connected to the Oak Room by a glass door, has been open since early this year and is a family-style breakfast-and-lunch place.

Riordan’s Tavern, which opened in 2007, is downtown in what used to be an annex for spillover diners at the Pantry, and its motto is “Stiff Drinks and Great Steaks.”

Having two pairs of restaurants that share kitchens is only partly a matter of efficiency. In the case of the Palisades restaurants, Riordan sensed a demand for both a place where families could eat every day and a spot where locals could get a drink and a nice dinner after work.

IN THE case of the Original Pantry and Riordan’s Tavern, the reasoning was more prosaic.

“The motivating thing was we weren’t doing quite as much business at the Pantry as we had in previous years, and the best marketing tool we had was that line of customers that was always outside,” Riordan says. Closing the annex and putting in the Tavern reduced the number of available seats at the Pantry, “and we’ve had lines outside ever since.

“It also makes for more efficiency,” he says. “We figure the turnover for a table at breakfast is down from 29 minutes to something like 26 minutes, which is a lot.” 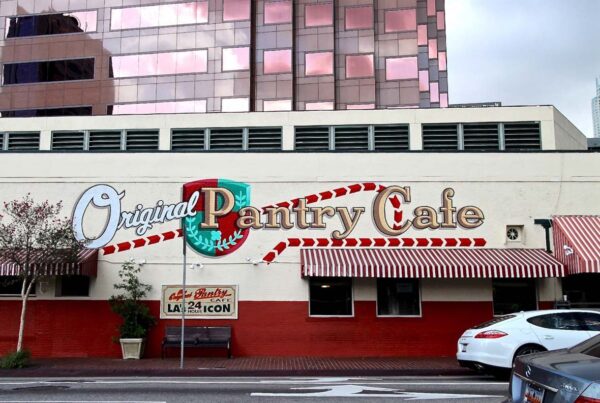 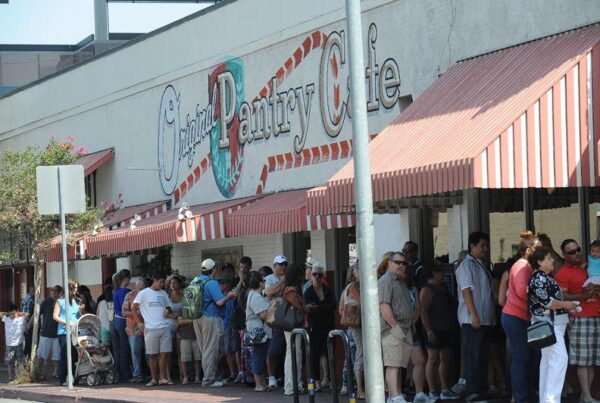 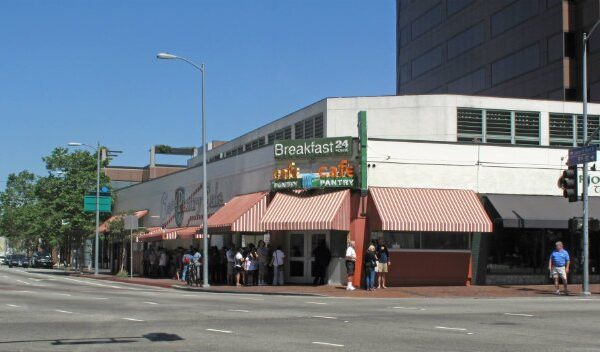